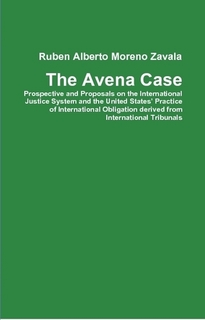 The Avena Case: Prospective and Proposals on the International Justice System and the United States' Practice of International Obligation derived from International Tribunals de Ruben Alberto Moreno Zavala: "This work refers to the 2004 Judgment of the International Court of Justice on the case pertaining Avena and other Mexican Nationals (Mexico v. United States of America). It deals mainly with the throughout aftermath and carefully studied prospective of the controversy on the application and interpretation of the 1963 Vienna Convention on Consular Relations and the current issues to assure the protection of consular rights of foreigners detained abroad. This case is, in the own interpretation of the International Court of Justice, the culmination of a trilogy of cases on consular rights presented before it. This work intends to provide the unfamiliar reader with the basic tools to understand the questions surrounding Avena and its transcendence in the topic of consular protection not only for Mexico and the United States, but for all countries party to the same Convention."
Publicado por Rubén Alberto Moreno Zavala el miércoles, agosto 03, 2011 No hay comentarios.: